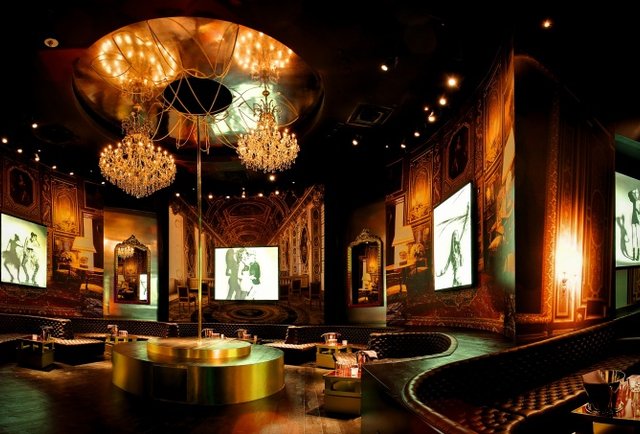 The doors have been officially shuttered at Planet Hollywood’s Gallery Nightclub. Rumors ran rampant during Labor Day Weekend, and a Caesars Entertainment official told me this afternoon: “Planet Hollywood can confirm that Gallery Nightclub has closed. We are currently evaluating exciting options for what will replace this space and will be in touch soon regarding plans.”

-The Red Room, whose holographic 3D photos follow you everywhere with their eyes.
-The Gold Room, sporting a giant Champagne glass in which ladies actually named Bubbles will strip tease you.
-The Main Room, where acrobats and go-go dancers will fuel the crazy on the enormous dance floor below, the VIP booths come with swings, and the bar tops are covered with photos of naked women laying in vegetables, so you can endlessly gawk at their legs!

Some employees showed up to work to find out the club was closed with no warning. Systems and alcohol were pulled out from the club after Saturday’s final night, and everything was gone by Monday morning. Employees were shocked it was so sudden. They had no idea it was closing.

It’s rumored that there were major disagreements between the hotel and the club over its hard-core hip-hop entertainment attractions and patrons who lined up in the casino. “They wanted a more diverse demographic that was more in keeping with the hotel guests rather than in conflict with them,” I was told.

By mid-afternoon today, all references to Gallery as a nightlife attraction had been removed from Planet Hollywood’s website. Nightlife insiders note that this is the first club to fold since the opening of Hakkasan at MGM Grand and Daylight and Light at Mandalay Bay, and they ask which two others mid-Strip are struggling.

Related article; What's so good about living in Vegas?